Wow. #ToyStory4 is full of surprises. Lots of laughs and of course a few tears. Stay until the lights come up in the theater.

#ToyStory4 brings a conclusion to the story of Buzz & Woody that we never knew we wanted but is totally worth it. It sets up a potential future for the franchise with a host of new characters. Definitely a quality Pixar film and one of their best sequels.

Just saw #ToyStory4 it is so cute with a little edge to it!! You all are going to love it. It was really cool to see how much has changed with animation, etc. from the first one! #ToyStory pic.twitter.com/t6jeuFA6Mj

Pixar has done it again! #ToyStory4 is my new favorite! I dare you not to laugh and cry at this love story about friendship.

#ToyStory4 is simply delightful. A tightly paced narrative that harkens back to the feeling of the original 2 films featuring some of the franchises best comedy. A relatable & mature message that speaks to those who grew up with it. #DukeCaboom RULES! More Keanu please. pic.twitter.com/JB3RZRGrTi

Many people have said we dont need a #ToyStory4 (myself included) but trust me when I say we NEEDED this story. I cried harder than I ever have at a #ToyStory film, and also laughed harder. This is a MUST SEE! in theaters June 21st! #Disney pic.twitter.com/2YH4FAtLH8

#ToyStory4 made me want to run and hug my childhood toy. Pixar rewards fans for being invested all these years. Beautiful character journey for Woody. Not quite as good as Toy Story 3. Keanu as Duke Caboom is an absolute treat. Has my favourite nod to The Shining yet.

#ToyStory4 goes to infinity and beyond. It tugs at the heartstrings right from the get go and doesn’t stop. The new characters fit right in and all your old favorites get time to shine.

For those worried about #ToyStory4, don’t be! The movie is magic and delightful. It will also wreck your emotions just as much as the other three, so that’s something to look forward to!

#ToyStory4 is a touching and moving addition to the franchise. BRING THE TISSUES!!! You will fall in love with Forky and @KeeganMKey / @JordanPeele steal every scene as these guys 👇👇👇 pic.twitter.com/WpKli7wyrT

Just saw #ToyStory4...and it's my favorite in the franchise. You'll laugh as much as you'll cry. You'll feel like a kid one minute and an adult the next. Can't wait to take my friends to see it. pic.twitter.com/hhPf0Va7CF

One of our editors just saw #ToyStory4. Here's her immediate take: "Toy Story 4 is so much fun and easily the funniest of the four movies. Strongly recommend." pic.twitter.com/Lg01lhKW54

Just finished #ToyStory4! If you were nervous about another Toy Story movie, don’t be! It is amazing and another great addition to the franchise. I can’t wait to see it again 🙏🏽🔥. pic.twitter.com/yqgmGvFiNB

A few things about #ToyStory4 :
The level of animation that @Pixar has achieved in this film is astounding.#KeanuReeves is so awesome as Duke Caboom.
The theater we saw it in was a bit dusty...
And i loved the entire movie. So well done. Absolutely recommended. pic.twitter.com/u5ExEZBf6w

TOY STORY 4: Only Pixar at the top of their game can make a third sequel to a franchise about living toys that’s a poignant look at learning to prioritize your own happiness over the happiness of others. Also: feels as definitively final as 3 did. Keanu Reeves steals it all.

#ToyStory4 has an ending as lovely and warm and heartbreaking as Toy Story 3. In between the genuine belly laughs (thanks, Duke Caboom) is a story that has the heart that Pixar is known for. Loved it. 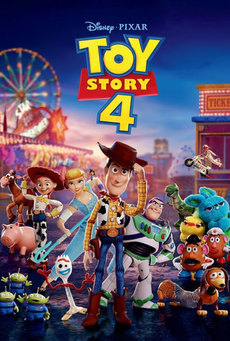